Born in Jerusalem, 1977, living in Milan, his works spread from huge sonic events for numerous performers to demanding orchestral and chamber compositions, from Icon/sonic operas which include side by side classical musicians, electronics, visuals and traditional carriers of ancient cultures, to highly technological projects, involving scientists, artificial intelligence and live sonic elaborations. His creations move from abstraction to complex observations of  the global reality - but at the same time are striking with their coherence and immediate impact on large heterogeneous public. As stated by one of Italy's major dailies, Il Sole 24 in their weekend cultural edition : "a contemporary cultural concert in which any kind of public will applaud" (Il Sole 24 Ore Domenica 01/02/2013). An important role in his works is the study and collaboration with living ancient musical traditions, which had given birth to concerts involving the nomads of Kazakhstan, the Samaritan cantors, the Ethiopian Ques & the Suotheast Asian gong and bamboo traditions. He connects traditions, cultures, art forms with no barriers, always putting great passion and profound study to reach new creative and poetic forms of synthesis.

Michael Boner studied classical guitar at Zurich University of the Arts under Walter Feybli, Jury Clormann and Anders Miolin and was awarded Bachelor- and Master-Diplomas with distinction in his major instrumental subject. During this time he was awarded a stipendium from the Fritz Gerber Foundation for young talent, as well as the sponsorship prize for his Bachelor project by Zurich University of the Arts, awarded once per year for an outstanding diploma project. He also took part in national and international competitions and masterclasses. He studied with Alvaro Pierri, Pavel Steidl, William Kanengiser and Scott Tennant among others. From 2011 to 2014 he studied Master Performance at Lucerne School of Music under Andreas von Wangenheim. He was awarded his degree in February 2014 with the grade “very good”. Within the scope of this Master’s study Michael Boner often worked with ensembles in the field of new music, which resulted in two appearances at the Lucerne Festival, one of which was in the KKL Lucerne. In 2007 together with Pascal Piller he founded the Marvin Guitar Duo, with whom he appears all over German-speaking Switzerland and Liechtenstein. Together they attended masterclasses by Odair Assad and Leo Brouwer among others. In addition to pieces from all periods of classical music, in their repertoire the duo also has their own compositions, which combine jazz- und pop-influences with classical models of composition. In July 2013 the duo launched their first CD 'Gravity' in the Moods Jazz Club in the Schiffbau, Zurich. “My guitar, a Model 05 from Ermanno Chiavi, captivates you with its warm but also very well-defined tone. The guitar sings beautifully, even in the higher fret-positions, while the bass always remains transparent. At the same time the guitar’s volume can easily hold its own with guitars with double-top or sandwich-top constructions, which is incredibly valuable for me in playing as a duo or with other chamber-music ensembles”. 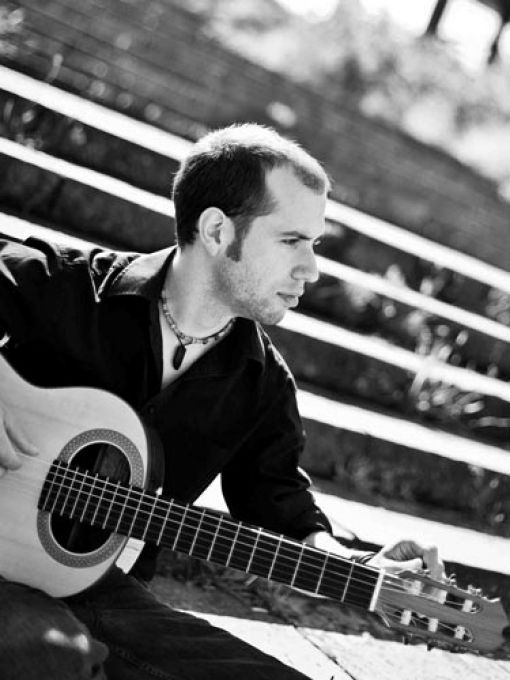 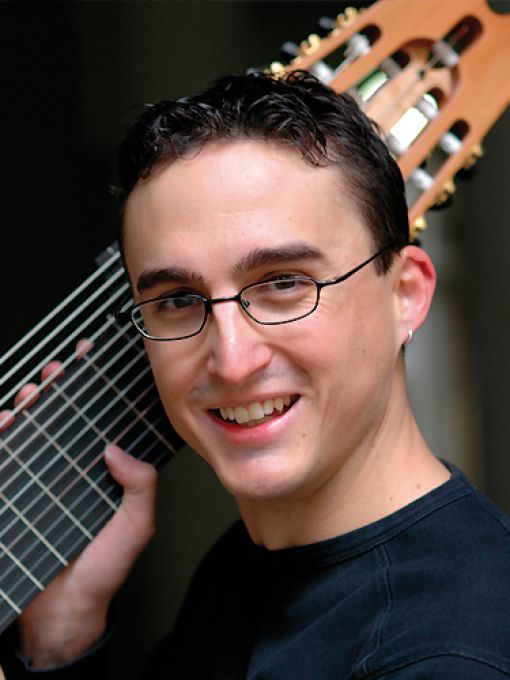 After studying guitar under Prof. Anders Miolin at Zurich University of the Arts, Ervin Huonder was awarded his concert-diploma in 2008, receiving the honour “with distinction” for his final concert. As an important part of his education he studied theorbo and Baroque guitar as well as figured bass under Eduardo Egüez. Ervin Huonder received additional important stimuli in masterclasses with Hopkinson Smith, Carlo Marchione, Alvaro Pierri, Stepan Rak and Toshio Hosokawa.

His interests include discovering less well-known compositions for guitars und lute instruments, for which he won first prize of the Marguerite Meister Foundation in 2006.

In 2008 his outstanding work was recognised by the award of sponsorship prizes by Canton Graubünden and by the Eliette von Karajan Foundation.

After a few releases of electronic music (including in 2002 the CD "On y va! Remixed") Seeman has been writing Italian canzoni. His most recent album is 'vita chiara", with which in recent years he has been touring Switzerland in a trio with Ali Salvioni (percussion) and Reto Claudio Gaffuri (bass).
"Ermanno Chiavi’s guitar model 04 has a clear and loud sound in all registers. Within a band, with bass and percussion, it is very assertive, the treble increasingly begins to sing, and in particular arpeggios are wonderfully rich in overtones. For me as a singer and guitarist it is a very reliable instrument, and I also like the simple beauty of design”. 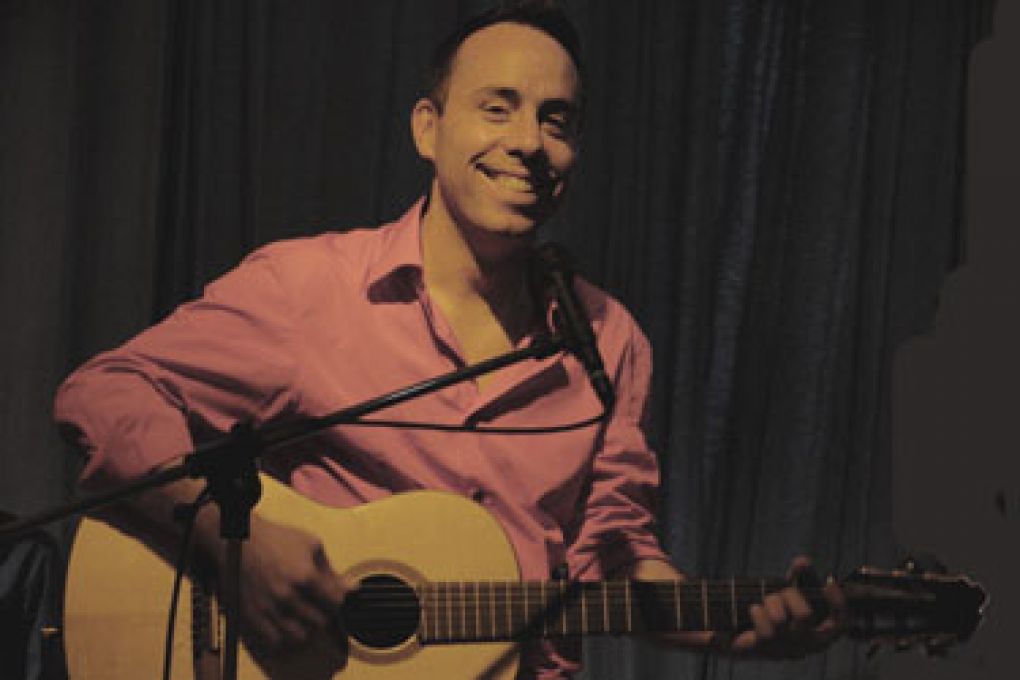 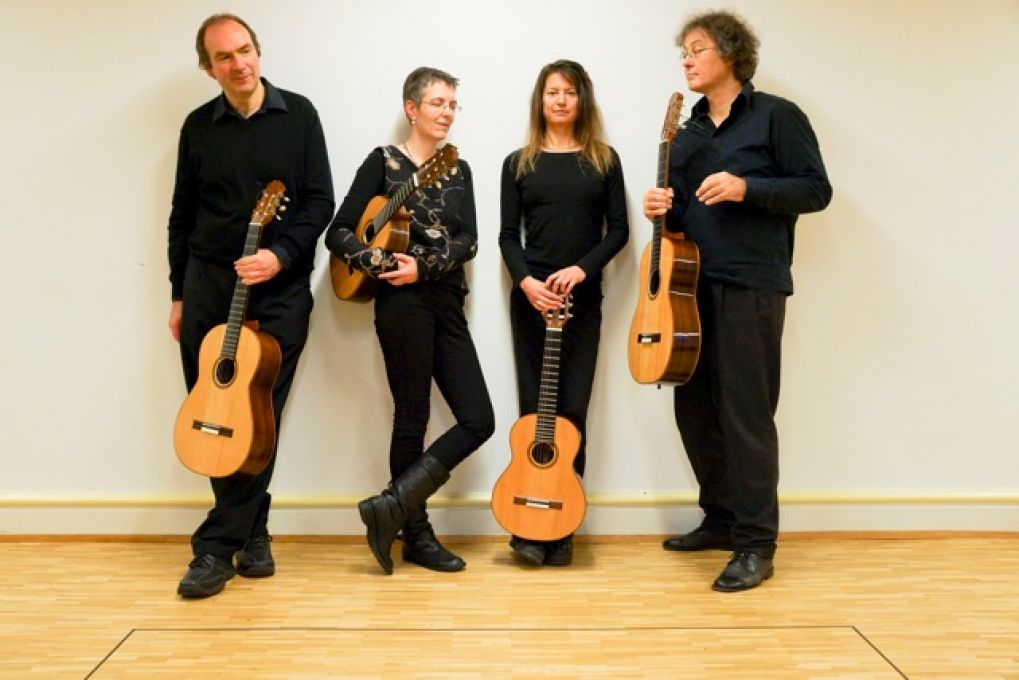 “We met during our studies and later formed our quartet with the goal of acquiring music from ‘off the beaten track’ for our instruments, and making it accessible to an interested audience. We also broke new ground when we commissioned the guitar-luthier Ermanno Chiavi to build a special set of instruments: Analogous to other instrumental quartets we play octave-, quint-, terz-, 6-, 10-, and 13-string guitars. We arrange music especially for our instruments and also commission new compositions that can make use of our extended sound possibilities”.

“In Anders Miolin we are confronted with a true artist, who makes us forget that he is also a virtuoso because he has mastered that unusual quality and virtue called poetry.” Leo Brouwer, composer, conductor and guitarist, Habana, Cuba The highly distinguished artistry of Anders Miolin is characterized by a unique sound, a unique repertoire and a unique instrument. Anders Miolin’s excitingly innovative programs are boundless journeys in time and space, revealing new worlds of musical art. Through his worldwide concerts, master classes and several recordings for the renowned label BIS, Anders Miolin has won international acclaim as an exceptional artist of the highest order. Anders Miolin is professor of guitar at the Zürich University of the Arts Anders Miolin records with a Chiavi Guitar 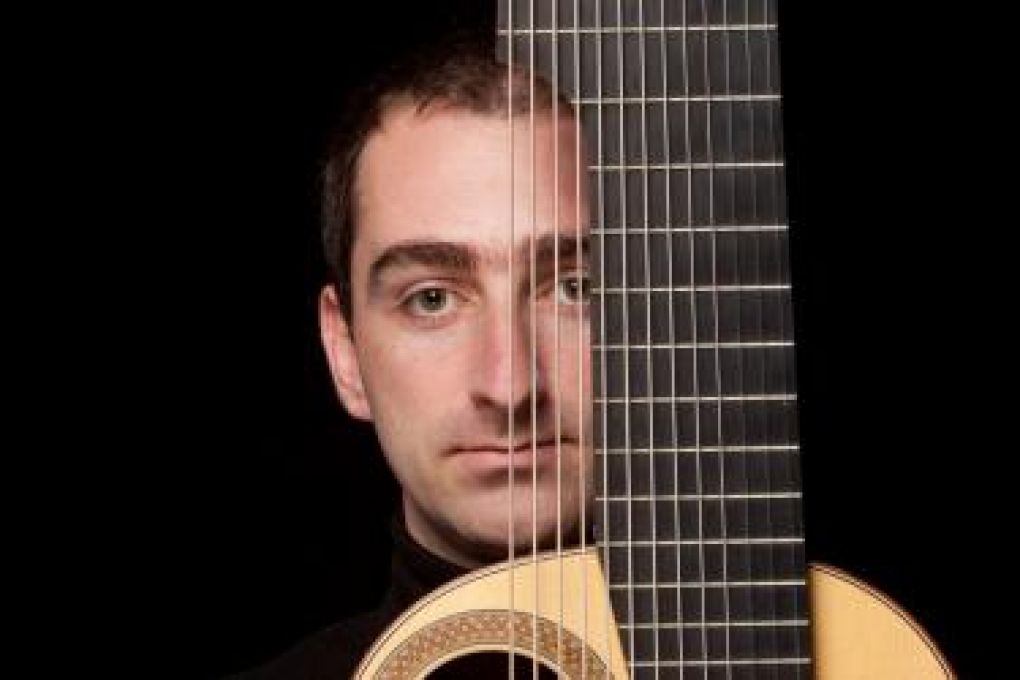 Admir Doçi is one of the most innovative guitarists of his generation. His interpretations are acclaimed for their great virtuosity, their big dynamic range, the technical mastery and for their artistic maturity from the international press all over the world. Born in Tirana (Albania) 1982 he studied at the Zurich University of the Arts with Prof. Anders Miolin and won over ten awards at international competitions in Switzerland, Thailand and Liechtenstein (among others the first prize at the international guitar competition of Liechtenstein). His busy concert schedule includes appearances at renowned festivals such as Boswiler Sommer, Liechtenstein Guitar Days, Ohrid Summer Festival, as well as tours with mezzo soprano Leila Pfister, flutist Matthias Weilenmann, cellist Mattia Zappa and the Galatea Quartet. As a soloist he has performed with well-known conductors such as Kai Bumann, Markus Bosch or Carlos Dominguez-Nieto with different orchestras such as Kammerphilharmonie Graubünden, Ensemble of contemporary music Zürich, Albanian Radio-Symphony Orchestra, Neues Glarner Musikkollegium, Zuger Sinfonietta and Swiss Youth Symphonic Orchestra. He already made his debut at prestigious concert halls such as Tonhalle Zurich, Kulturcasino Berne and Victoria Hall Geneve. Contemporary music plays a special role in his career, premiering many works dedicated to him from composers like Martin Derungs, Fabian Müller or Martin Schmid. His CD recordings with labels Euroclassics and Guild are played worldwide by renowned radios such as BBC Radio or Fine Arts Radio Missouri Since 2008 he is a professor of guitar at the University of the Arts, Tirana and at the Faculty of Arts at the State University of Tetova / Macedonia.Boccherini

Studied classical guitar in Winterthur (Christoph Jäggin) and Karlsruhe (Prof. Wilhelm Bruck).
His approach to music is characterized equally by intensive analysis of tradition, e.g. historical performance-practice, but also by an unbridled experimentation, which manifests itself in working with many composers, as well as in improvisation. In the field of contemporary music, he drew attention to himself with numerous premieres, including works by Klaus Huber, Younghi Pagh-Paan, Johannes Schöllhorn, Myriam Marbe, Ivan Wyschnegradsky, Fritz Voegelin and Bettina Skzypczak.
He received further stimuli from the composers Dieter Schnebel, Fred Frith, Jürg Wyttenbach and Toshio Hosokawa. He does not hesitate to use instruments such as electric guitar, balalaika, banjo or to prepare his instrument to reflect the needs of composers. His love of old music and historical performance-practice led him to the study of the theorbo, a baroque bass lute and the art of figured bass.
Markus Hochuli appears as a soloist and chamber musician in numerous ensembles, as well as an additional instrumentalist in several orchestras. His concert career has taken him to Italy, France, Germany and Denmark. In August 2000, his first CD "MARSYAS" (a duet with Matthias Arter, oboe and baroque oboe) appeared on the German label "en avant records". He teaches at the Zurich Conservatory, and in 2001 was honoured for his artistic achievements by the Aargau Trustees with an award for artistic creation. 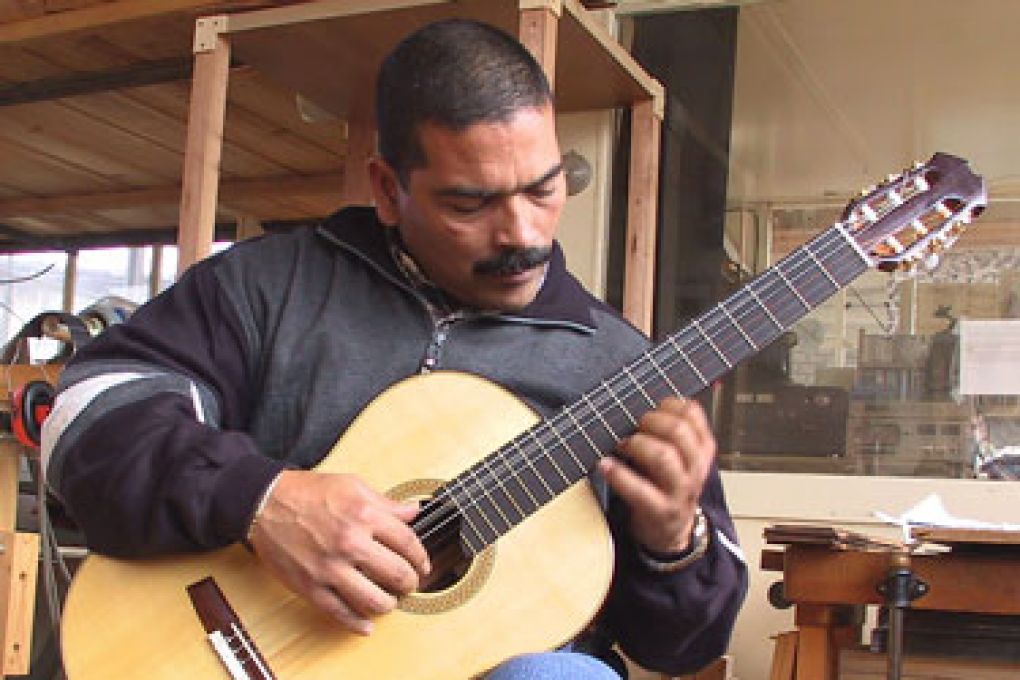 Born in 1966 in Matanzas, Cuba, Jorge Luis Zamora studied guitar at the University of Havana under Aldo Rodriguez. He completed his studies in 1985 with distinction. After his studies he took part in the most important guitar competitions. He was a prize-winner at famous festivals such as “Silesian Autumn” in Tichy, Poland, “Manuel Ponce” in Mexico, “Int. Guitar Festival and Contest of Havana” in Cuba, “René Bartoli” in Marseille. His most important honour was the first prize in the international guitar competition of Radio France in Paris. Jorge Luis Zamora is one of the most promising bearers of hope for Cuban music, which can be seen from the list of festivals where he has won prizes. His abilities are not only demonstrated by prizes won in competitions. Jorge Luis Zamora - still living and working in Havana, Cuba - is consistently being invited to the major guitar festivals. He has celebrated great successes in concerts all over the world. Of special mention are his appearances at Volos in Greece, at the “Guitar Week” in Paris, at guitar festivals in Madrid, Havana, Guatemala City, in Poland, Korea, China, the former USSR, the Czech and Slovakian Republics, Switzerland, Austria, Liechtenstein, Hungary, France, Spain and Martinique.
His concert tours take him to Asia, Latin America and Europe. As a soloist he plays with various symphony orchestras, especially overseas, and of course in Cuba. His repertoire includes works by Bach, Brouwer and Barrios via Piazzolla to Rojas. Jorge Luis Zamora can combine European and Latin American composers with Afro-Cuban rhythms and joie de vivre - he offers his listeners classical guitar at the highest level, enriched with Caribbean undertones.

Christoph Jäggin was born in 1956 in Romanshorn (Switzerland).  He studied classical guitar at the Winterthur Conservatory (teaching-diploma and graduation-certificate) and with Karl Scheit at the University of Music and Performing Arts, Vienna (1979 concert-diploma with distinction). His skill in interpreting new and old music resulted in him having works dedicated by many composers including Niccoló Castiglioni, Klaus Huber, Rudolf Kelterborn, Hans Ulrich Lehmann, Yori-Aki Matsudaïra, Graciela Paraskevaídis, Harri Suilamo, Jacques Wildberger, Christian Wolff and Jürg Wyttenbach.

For many years Christoph Jäggin was a lecturer in the Winterthur Department of Zurich University for Music and Theatre.